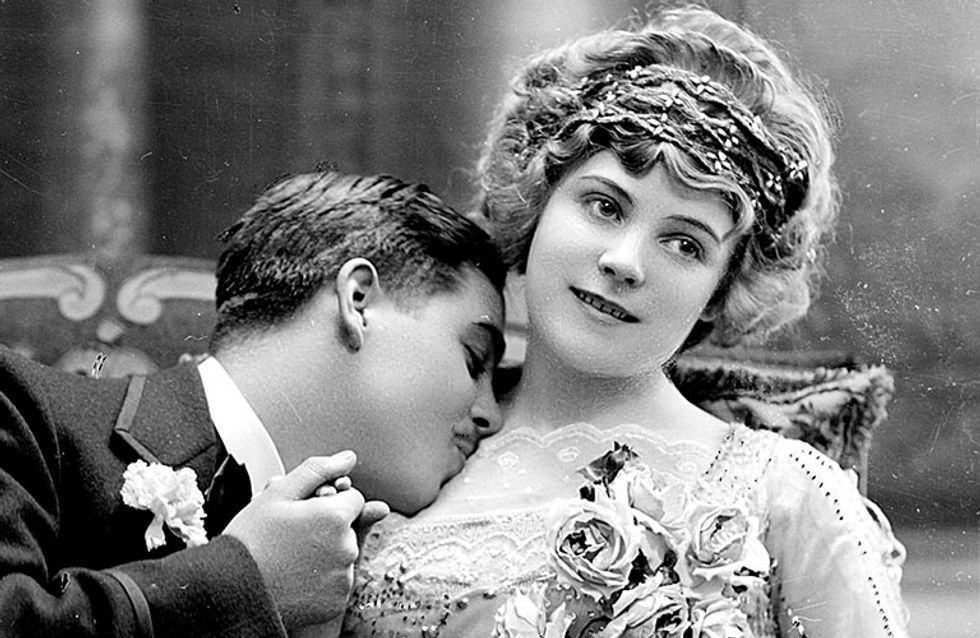 We learned a lot in the 19th century but how to have a rockin' good time in the sack is NOT one of them. These hilarious tips for new wives from the worst 'sexpert' in the world are enough to stop any budding sex session in its tracks. Forever...

Let's just give you some context here. Back in the ole 1800's Ruth Smythers, a Vicar's wife wrote a book, 'Sex Tips For Husbands and Wives from 1894' in an attempt to help set up clueless wives in the art of all things carnal. All fine and dandy so far, until you realise that Ruthie would rather inflict serious injury on her own husband (seriously, HER words) than actually have sex with him.

So let's go back in time to see what the world would be like if you let Ruth Smythers into your bedroom.

Lesson One: If You're Wise, Reduce Frequency Of Fornication Immediately.

"Most men, if not denied, would demand sex almost every day. The wise bride will permit a maximum of two brief sexual experiences weekly during the first months of marriage. As time goes by she should make every effort to reduce this frequency."

Lesson Two: Oral Is For Pervs.

"Most men are by nature rather perverted, and if given half a chance, would engage in quite a variety of the most revolting practices. These practices include among others performing the normal act in abnormal positions; mouthing the female body; and offering their own vile bodies to be mouthed in turn"

"Feigned illness, sleepiness, and headaches are among the wife's best friends in this matter. Arguments, nagging, scolding, and bickering also prove very effective, if used in the late evening about an hour before the husband would normally commence his seduction."

"A wise bride will make it the goal never to allow her husband to see her unclothed body, and never allow him to display his unclothed body to her."

"Sex, when it cannot be prevented, should be practiced only in total darkness."

Lesson Five: ...He'll Hopefully Hurt Himself In The Darkness.

"Once the bride has donned her gown and turned off all the lights, she should lie quietly upon the bed and await her groom. When he comes groping into the room she should make no sound to guide him in her direction, lest he take this as a sign of encouragement. She should let him grope in the dark. There is always the hope that he will stumble and incur some slight injury which she can use as an excuse to deny him sexual access."

Lesson Six: If All Else Fails, Play Dead.

"When he finds her, the wife should lie as still as possible. Bodily motion on her part could be interpreted as sexual excitement by the optimistic husband."

Lesson Seven: All Affection To Be Met With Passive Aggression.

Lesson Eight: If That Doesn't Work...Pee.

"If he lifts her gown and attempts to kiss her anyplace else she should quickly pull the gown back in place, spring from the bed, and announce that nature calls her to the toilet. This will generally dampen his desire to kiss in the forbidden territory."

Lesson Nine: Have A Connection. Sort Of.

"Eventually, the husband will learn that if he insists on having sexual contact, he must get on with it without amorous embellishment. The wise wife will allow him to pull the gown up no farther than the waist, and only permit him to open the front of his pajamas to thus make connection."

"She will be absolutely silent or babble about her housework while he is huffing and puffing away."

Lesson Eleven: If Not Already, Make Even Less Enjoyable By More Nagging.

"Many men obtain a major portion of their sexual satisfaction from the peaceful exhaustion immediately after the act is over. Thus the wife must insure that there is no peace in this period for him to enjoy."

Tempted to try any more of Ruth's tips? Just go ahead an buy her book. Worth every penny.

Are these the worst sex tips in the world? Tweet us at @sofeminineUK.

O M Geeee! How To Have A G-Spot Orgasm

Sex Positions For A Small Penis

The Best Striptease Songs To Set The Mood