10 Thoughts You Have When You Go Back To His Place

by Dagney Pruner Published on 5 February 2015 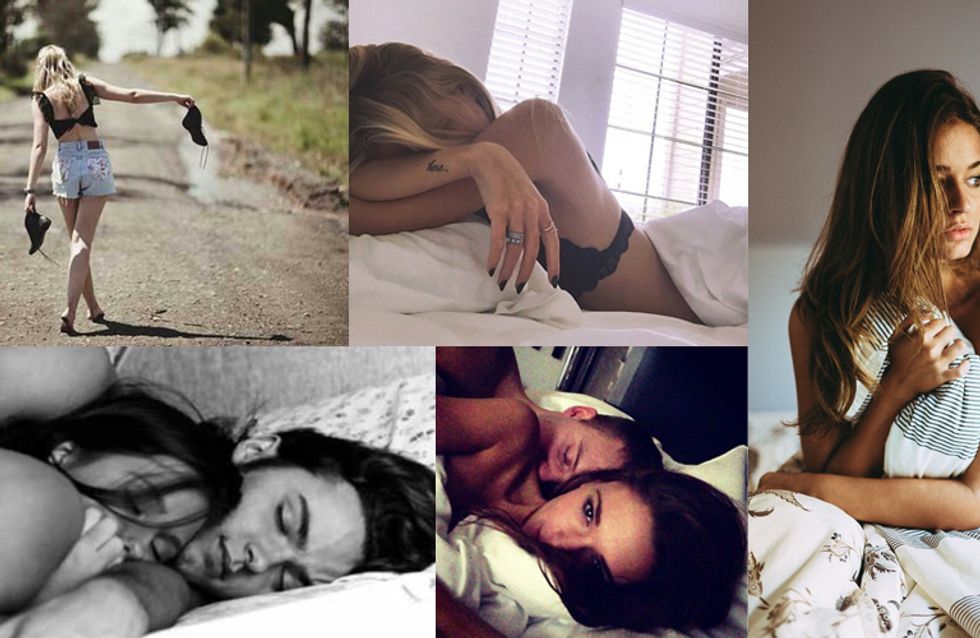 Many single girls set out in the evening with hidden hopes of finding Prince Charming and getting invited back to his palace...or his really crappy apartment he shares with four other untidy men. Regardless, every girl has all sorts of anxieties before they decide to go back to their new man's place (cross your fingers there's mouthwash in the bathroom). Here are our 10 most common thoughts we have before entering foreign territory.

1. Praying he does not have white pillow cases

For any girl that loves eyeliner and bronzer there is nothing worse than going back to a cute guy's place and realizing that he has WHITE pillow cases. This means that when you finally pass out on that perfectly clean pillow it is going to be covered in orange and black smears when you wake up. Then he will realize that you are not in fact a naturally tan female with eyes that pop, and he'll possibly have the thought that you may or may not be a drag queen.

2. Dreading the morning walk of shame

Some nights you go out guns blazing with your outfit: bandage skirt, crop top and some killer hooker heels. We bet you looked like a smokeshow the night of, but the next morning walking down the road while young parents who aren't hungover are pushing their kids in strollers giving you mean looks? There's a reason they call it the walk of shame. Although, then you realise that although you may look like you've just walked off Sun Sex and Suspicious Parents, you got laid last night and given that they have a newborn and those grumpy looks on their faces, those parents probably did not. Silver lining.

3. Hoping his hot roommate is home

Most guys live with a few other men, and sometimes they happen to be way hotter than the guy you went home with. Those smoking hot roommates usually have a girlfriend, the world is just that cruel. You can look, you just can't touch... you can also pray that him and his girlfriend break up.

4. Would it be weird to use his toothbrush?

There is nothing worse than waking up hungover at a guy's place and realising that you are in DESPERATE need of a toothbrush. Like it's basically life or death. But then comes the question: do you feel comfortable enough to use his toothbrush? Sure you spent all night swapping spit, but borrowing a toothbrush unsolicited can be a little too intimate. However, given that he almost swallowed your face last night, it's probably safe to say you can go ahead and use it... just this once.

5. Will he invite you to stay the night and then order an uber for you?

Ahh the awkward loitering the night of and the next morning is always a game of cat and mouse. Do you stay over and treat yourself to sleeping in or is he totally hinting that he wants you to leave after the hookup? Does he order an uber for you like gentleman or does he simply escort you to the door and give you a nice kiss on the cheek goodbye? So. Many. Questions.

6. Hoping for a better nightcap than warm beer

It's always nice to have a little nightcap when you get back to his place to take the edge off, but there is nothing worse than when he opens his fridge and all he has is lukewarm beer. Unless you are offering us a nice glass of red vino before slyly "showing us your room," don't even offer up the beer in a can, it's basically the opposite of setting the mood.

7. What to do with the contacts and fake eyelashes

There is nothing worse than waking up blind at a guy's place, so the night before you have to decide if you are going to trash your contacts or sleep in them and endure the extremely dry and uncomfortable experience of day old contacts the next morning. And the fake eyelashes? Sure they took 30 minutes to put on the night before and look fabulous right now, but what are they going to look like after a night of sleep? It's a gamble either way.

8. Wishing you had packed backup toiletries

So you know how some guys go out without condoms in their wallets because they think it is jinxing their odds of bringing a girl home? Well girls who pack a backup toothbrush and face wipes feel the same way. Nobody wants to be presumptuous about their odds going into a night; however, when you finally end up getting lucky and heading back to a guy's place then you really start regretting your decision to leave the travel toiletries at home.

9. Wondering what the odds are he takes you to brunch with the roomies

In the modern age there is not a bigger sign of "he likes me" than him inviting you to brunch with his roomies after you wake up at his place. The awkward lingering that happens the next morning goes one of two ways: either he says he's signed up for a spinning class or has to go to work so you should go, OR he asks you if you want to get some grub with the boys. Which will it be?! Because we plan on analysing it with our girlfriends for the rest of the afternoon.

Then there is THE ultimate test of a hookup's staying power after going back to his place, does he kiss you goodbye or no? Even if you spent all night rolling around in the sheets together, some guys don't want to send "mixed signals" by giving you peck right in the kisser. Twisted world we live in, right?

Do you feel like this when you go over to a guy's place? Tweet at us! @sofeminineUK

50 Thoughts Everyone Has After One Too Many

18 Things Only The Middle Child Knows To Be True

50 Thoughts Every Student Has During A Lecture

by Dagney Pruner
For all the best videos, memes and shareable news!