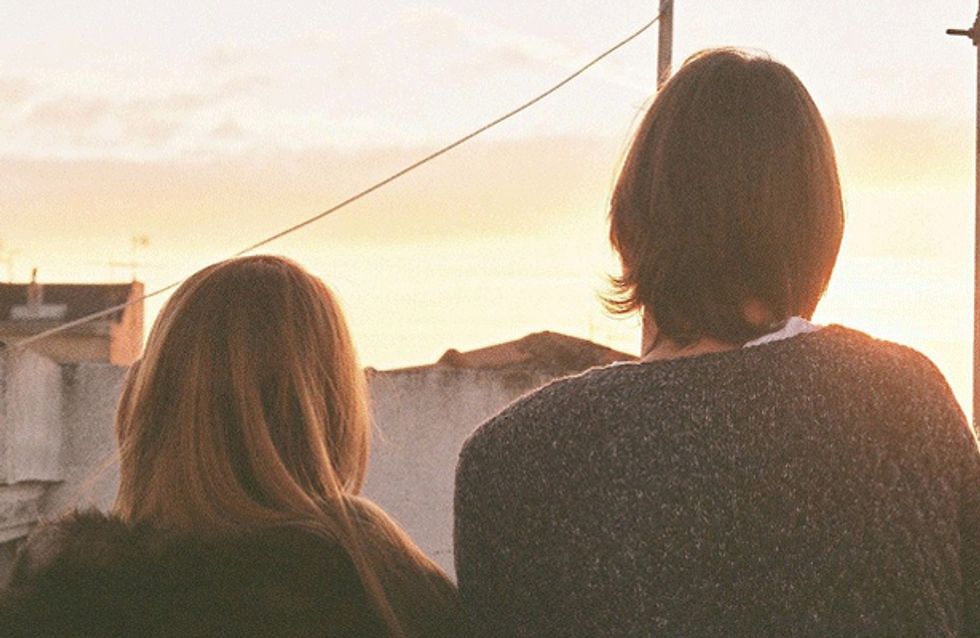 We've all in been one of those relationships that's just a bit - how do we put this? Crap. Whether you've had your doubts from the beginning or things have taken a turn for the yawn, being in a dead end relationship isn't as easy to recognise as you might think. Even if everyone already knows, you might need a little more convincing...

Being in a dead end relationship isn't always your fault. When you love, or have loved, someone, it can be incredibly difficult to accept that maybe it isn't what's right for you, or what you want anymore.

​However, what is your fault is when you do know and do nothing about it. That's just messed up.

So​ for all you women out there who have a feeling it's going nowhere and need some proof to hit it home, take a look at these 25 signs your relationship is on a one way street to nowhere.

1. He nevers remembers anything about you

You've told him a million times you wear contact lenses, or what your parents are called and he NEVER remembers. He should have enough respect and genuine interest for you to be remember simple details about your life. These kind of things matter. If he isn't interested enough to remember now, maybe it's time you forgot him.

If your idea of planning for the future is deciding whether to defrost chicken or beef for tomorrow's meal, girl, forecast is looking frosty.

3. You’ve not been introduced to his friendship group

We get the 'bros before hoes' BS but if he's always going to meet them and doesn't ever introduce you, it's beyond not OK. He should want to show you off to his mates as soon as possible (you ARE amazing after all) so if he hasn't, we'd say that's a massive red warning sign.

4. You always make the effort

This is possibly the most FRUSTRATING thing ever. If you're always the one making plans and he can never be bothered, ditch him, it's not worth it. A guy who sees something going somewhere will make the effort and not just rely on you to do all the work, all the damn time.

​Do you want to have to drag him into this relationship kicking and screaming? Thought not.

If he recoils from your kiss like you have a permanent gaping cold sore every time you go outside, what's his problem? Don't take the 'I'm just not a PDA kind of guy' excuse.

Holding your hand or touching your arm isn't like going at it on the table in front of the whole freaking pub. If he isn't proud to let others know you're his girlfriend, he shouldn't have one.

6. You argue more than you laugh

This one's so obviously a bad thing we don't even need to explain it...

7. You spend most time in front of the TV or X-box

If you spend most of your time watching TV trying to zone out the fact you have nothing to talk about/ANYTHING in common, you might want to stop and escape while you still can. What on earth are you doing rotting on that sofa when there's people on your phone that you could be 'matching'.

If you've got to the point where a conversation is just awkward chit chat then it's obviously not good. Equally if you do talk but just talk AT each other to hide the fact you're bored by every word he's saying - naaat good either.

We're going out on a limb here, but actually liking your partner does count for the long run.

If every time you text a cute emoticon or spout ridiculous (but charming and hilarious) stuff to him, all you get is radio silence, it's just not good enough. You should be able to make contact with him during the day without feeling like an awkward tween or like you're his no.1 stalker.

​A quick 'how's your day?' goes a long way. You should both have a genuine interest in what's happening in each other's lives and want to have contact - no matter how trivial.

You know how much you used to love his laugh? Or thought the fact he always farts after he's had curry was adorbs? Now he's just loud and gross.

If everything you used to love about him has now turned into tiny, knife-like niggles that when he does them, make you want to jump across the table and strangle him, metaphorically of course...Well, there's not really any going back from there.

11. Your life goals aren’t the same

Considering you know, you're together and everything, you should probably have some kind of similar outlook on what you want your lives to be like in five years. If he wants to have kids, house, the whole schbang and you want to be waist-high in turquoise water over in the Caribbean, things probably aren't going anywhere.

Sex goes through ups and downs in every relationship, but if you're in your onesie more than he's in you, things have got to change.

​Passion and excitement are a big part of a relationship and even if you're not doing it all the time, that passion still shouldn't completely go - otherwise you're little more than just friends.

13. Your relationship is family free

Nothing says permanent relationship more than meeting the parents. If you haven't introduced him to your parents and neither has he, you might want to pick apart why that is. Who are the people who will tell you straight? Your flesh and blood. If you're afraid of what they might say, maybe you've answered your own doubts right there.

14. You don’t think of him when you’re not together

We're not saying your every waking thought should be of your partner, but generally thinking about him is normal during your day to day. If he doesn't jump into your head even once throughout the day, maybe you're just not that bothered by him any more.

Which leads onto our next one...

15. You're starting to find EVERYONE else attractive

​If you think that everyone, and we mean everyone, is an option then chances are the flame with your partner has burnt out.

Like reaaaally nasty. If you guys keep bringing up things from the past or arguments escalate quickly into areas that should remain totally off limits, you might want to ask yourself what good this relationship is doing for you? If you don't have an answer, at least you have an escape option.

17. You've never gone away together

Being able to tolerate each other 24/7 for a week is about the only way to test if you're going to last. Vacations = make or break. If you haven't even tried it after 6 months, you're already broken.

If you have that niggling doubt but swish it away with thoughts of his 'nice house', the time 'you've invested', or the fact that you could have an 'OK life together', just do yourself a favour and listen to yourself. If you were hearing your friend say the same you'd tell them to get some balls and leave. Truth hurts.

He belittles you in front of your friends? Absolute. No. No. If your guy doesn't respect you, it's over. Point blank. You want someone who says they admire you, that they're a better person for you, not that you're useless. You want a man, not some insecure boy.

20. You’re constantly waiting for him to change

Growing and maturing together is part and parcel of a healthy, strong relationship - you're not going to be the same people you are now at 40. But wanting to change the way he dresses, his humour, his attitude - stop. Trying to mould someone into something they're not is a sign they're not right for you. Just cut the chord and find the person you're looking for.

21. You over-sacrifice & he does NOTHING

Relationships are all about balance, and if you're tripping over yourself to please him and he doesn't reciprocate, all you're setting yourself up for is a massive fall. Right on that pretty face.

22. You cringe at the thought of him in public

Does he make awkward jokes and NO ONE laughs? Fart in front of your friends? Hell, even if he doesn't do those things but still makes you squirm at important occasions, there might be something else to it.

23. You can't imagine him as your other half

If you can't imagine spending the rest of your life together, then frankly, what the hell are you doing. Quit wasting your time just because you don't want to be alone. You could be missing out on finding someone you do want to spend that time with.

24. He never gets annoyed when you cancel

If it seems like he's relieved you don't want to spend time together, well that's just plain insulting.

25. He doesn't care enough to get jealous

We're not saying that he has to go all Justin Lee Collins on yo' ass but if a guy is hitting on you and his reaction is just 'meh' it's time to leave. If he doesn't care enough to bat an eyelid when his girl is getting hit on right in front of him, you can bet he's not in it for the long run.

Feeling too familiar? Don't agree? Tweet us at @sofeminineUK and join the debate.