10 Signs You're Just His Sugar Mama

by Cliche Wynter Published on 17 February 2015 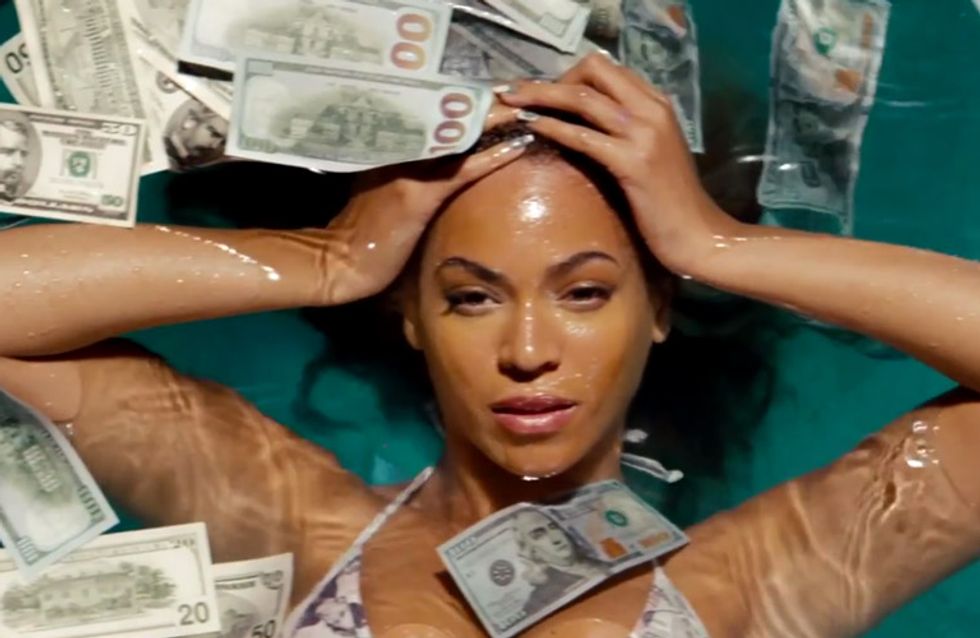 Women get a bad wrap for being "gold diggers"; soulless vipers looking to drain men of all their precious coins. The truth is, gold digging works both ways. Newsflash: Men can be users, too. Ladies, here are 10 signs you're just his sugar mama. If any of this sounds familiar, just run...

There's nothing wrong with picking up the check every once in a while. It's definitely nice to know that a woman can hold her own. But if he always makes you pay (especially in the beginning), that's a problem. Why does he always turn to you when the bill comes? Where is his wallet? Where are HIS funds?

Oh, you know how this goes. He never responds to your good morning texts and never calls to see how your day is going. His fingers and vocal chords are suddenly repaired when he needs extra cash to go out with the boys or to pay that phone bill of his. The craziest part? He has no shame in asking.

3. He never gives you gifts

You'll often find yourself going broke to cater to his wants and "needs" only to find out he has no intention of reciprocating the generosity. That really cute purse you've had your eye on? Good luck getting it (unless if you're willing to splurge on yourself.)

4. He doesn't introduce you to his loved ones

That includes his friends, mom, dad, siblings.... heck, even his dog. If he isn't trying to bring you around the people who are closest to him, that's a red flag. He either has something to hide (ahem.. you), or doesn't want you getting too cozy with his loved ones.

No matter the reason, it could very well indicate you're not a long-term fixture in his life.

5. He likes to take you on long guilt trips

Not to be confused with long romantic walks on the beach. This is a guy who doesn't outright ask for everything he wants, but instead throws himself a pity party. It's usually a ploy to get you to bend to his will. He'll drop hints about how rough he has it, and how nice it would be if he had a "little help".

Yes, it's crucial to lend a helping hand where you can. However, if he's in a jam every week and needs you to rescue him, there's a possibility he's just using you.

6. He constantly reminds you that he isn't ready for a relationship

He'll lean on you entirely when it comes to finances, yet he'll take issue with putting a title on your situationship. There will be a million excuses as to why he's just not ready and that you should be patient until he is ready to settle down.

Gonna have to call BS on that one. We know how that story usually ends. Another chick swoops in, refuses to settle for the crap, and ultimately wins his heart.

7. He never takes you out in public

Does he freak out at the thought of being seen outside the four walls of his bedroom or yours? Does he make excuses whenever you say you'd like to go see a movie (even if it's your treat)? That smells like trouble.

8. He brags about all the stuff his ex gave him

It's hard to imagine that people even do this, but they do. This move is all about psychology and is aimed at the competitive or self-doubting woman. He hopes that by mentioning all the lavish gifts an ex gave him, you'll feel compelled to one-up her.

Please don't fall for this.

9. He's only affectionate once you've given in to him

He gets distant, angry, and withdrawn when you're hesitant about bankrolling his lifestyle. But the moment you give in he's back to singing your praises. He's fake and full of it.

10. He only wants to hang when he needs something

His schedule that was booked to capacity suddenly becomes wide open when the rent's due. Yup, he always has time for you when those bills roll in. Hmmm... coincidence? Probably not.

Ever found yourself in a situation where you were being used? We'd love to hear the story! Tweet us @sofeminineUK

20 Things Boyfriends Unintentionally Do That Piss Us Off

Things Women Should Never Put Up With In A Relationship

by Cliche Wynter
From hair ideas to outifts, look no further for your daily inspiration

The Hound
by the editorial team

Does A Dramatic Breakup Make It Easier To Walk Away From A Relationship?
by the editorial team